Taking care of business before the Tour.

A wonderful evening awaits if you take the chance to hear these 5 singer-songwriters/ bands from around the globe. Following their Manhattan CMJ Music Marathon concerts together last fall, they have joined up to tour the Southeast, culminating in showcasing at SXSW and Canadian Music Week in Toronto. Do your soul a favor and spend the evening with them, you'll be glad you did!
- Robert Singerman (Entertainment Manager: REM, Violent Femmes) 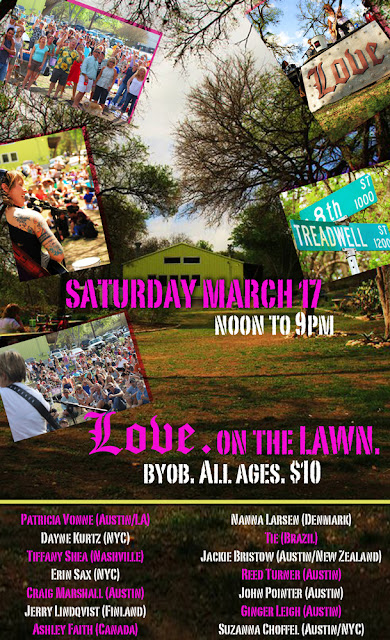 Here are some news on our upcoming Invasion of North America. I met up with Simon Ventus of Musik & Talang Music Conference and discussed drinking the world's most expensive coffee and the International Songwriters' Tour. Check out the clip below (in Swedish).. blog.musiktalang.fi

The date and venue for my Showcase at Canadian Music Fest is now confirmed..

There has been some changes in dates and venues for the IS-Tour...

Also check out the other Artists..

Jerry Lindqvist & The Grace Trio are proud to be a part of The International Songwriters' Tour in North America March 2012! 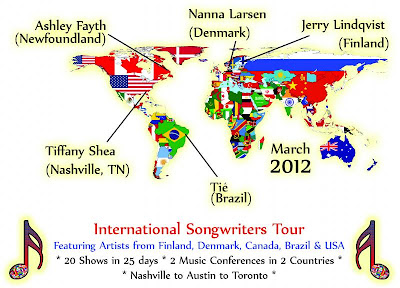 Robert Singerman (NYC) is known for discovering and developing new talent, and is a forerunner in the exploration and development of new concepts in the music industry. He has worked in the music business for over thirty years, representing at various times R.E.M., Gipsy Kings, James Brown, Suzanne Vega, Sun Ra, Violent Femmes, 10,000 Maniacs, Smithereens, Beastie Boys, Fela Kuti and King Sunny Ade. He has founded US labels; Fetish and Roadrunner, and has been meticulously involved in album and TV production; music supervision and consulting; co-founding music incubator and internet consulting firms.

In the spring of 2011, Singerman coached a songwriting camp in Austria, where he met Jerry Lindqvist as well as singer/songwriters Ashley Fayth from Newfoundland, Canada and Nanna Larsen from Denmark. In September, Singerman was a panelist at the Cutting Edge Music Conference in New Orleans, where he met and heard the music of Texan artist, Tiffany Shea, who currently resides in Nashville.

In October, at the invitation of Singerman, Ashley Fayth, Tiffany Shea and Jerry Lindqvist & The Grace played an official CMJ showcase together in NYC. They all discussed co-touring in 2012, starting with SXSW in March. As a seasoned US touring veteran, Tiffany Shea agreed to coordinate and book a tour from Nashville to Austin and then up to Toronto for CMW; co-producing alongside Singerman the “First Annual International Songwriters Tour.”

PLUS, if you order before February 15, you can have your item shipped to the World Headquarters in Nashville, and have your stuff signed by each of the Artists then shipped back to you by the end of March!! Isn't that EPIC?
Where to have it shipped for Artist Autographs:
International Tour Mngmt Office
2217 Riverway Drive * Old Hickory, TN 37138 * USA

For more information please visit www.tiffanyshea.com/tour_2012 and read more about the Tour and the Artists!!